Very pleased to announce that my current foster Coco was adopted on Thursday (January 26) by a couple in Sedona. They live primarily in Palm Springs and spend occasional time at their Sedona home, so Coco will get to ride in a vehicle for several long journeys a year, which is an activity he thoroughly enjoys. They have had a dog in their lives since 1974, so they have a lot of accumulated behavioral knowledge to draw upon, and they are enjoying having him in their lives.

The drive to Sedona was very enjoyable, and Coco sat (and slept) in the front passenger seat for most of it. We took a badly needed bathroom break at the I-17 rest stop that is located two miles before the Highway 179 intersection, and Coco was very vocal as he ran around and enjoyed the incredible scenery and the chillier temperature. Tomorrow (Sunday) he heads to Palm Springs with his new parents so he will have a new home and backyard to explore.

Coco was one of my most difficult fosters, given his unique background, special needs, and difficulty existing with the three other dogs. When he is away from other dogs, and hanging with people he likes and trusts, he is so relaxed and acts like a typical dog. He will be the only dog in his new home, so at least he won’t be stressed all of the time and his true personality will begin to emerge.

The drive back from Sedona was lonely without him by my side.

Comments Off on Coco update   |  tags: Coco | posted in Fosters

While preparing dinner for the four dogs this evening, I found myself pondering how the expression “dog’s dinner” is often used to describe something that is a disordered mess, and how the expression did not apply in any way to the dog dinners that I was busily assembling. Indeed, dog meals have gotten so complicated at this point that I likely need to write a job aid on how to assemble each one.

Not only does each of the four meals consist of different ingredients and supplements, but there are also subtle differences between what comprises each dog’s breakfast and dinner. In addition, Coco (my current foster) eats best when isolated in my bedroom, so my bedroom has now become his own private dining space. He barks for me when he is ready for me to check on his progress.

In contrast, my breakfast is typically a bowl of cold cereal accompanied by coffee, while dinner is likely something randomly inserted into a French roll and washed down with a can of soda.

Perhaps I should next ponder the expression “gone to the dogs”…

Comments Off on Dog’s dinner | posted in Uncategorized

Today was my first day of class at Southeastern Oklahoma State University, where I am pursuing a Master of Business Administration (MBA) degree with a concentration in Aerospace Logistics. Assuming I am able to stay on track with my class schedule, I plan to complete the program in sixteen months.

It is normally a two-year program, and can be completed in one year if one is so inclined, but sixteen months has a nice ring to it.

Comments Off on Back to school   |  tags: MBA, Southeastern Oklahoma State University | posted in General, My dog Sandy, Uncategorized

My latest foster (i.e. foster #7) is a 5-year-old Standard Poodle male named Coco. His ex-parents made the difficult decision to seek a new forever home for him when he and another of the canine residents in the home (ironically a former littermate of his) began displaying unacceptable behavior toward each other. They reached out to the Arizona Poodle Rescue for help, and we were happy to take him in. Coco’s full official bio will appear on our PetFinder page when he is ready to be adopted.

Coco has had allergy problems in the past and his ex-parents worked hard to identify his allergy triggers and eliminate them from his diet. He is a naturally shy dog, can become skittish when he hears unexpected or unusual noises, and he is nervous around other dogs, especially if they invade his personal space. He moved in on December 30, 2016, so on New Year’s Eve night I put his dark blue sweater on him to act as a comforting agent (in case of fireworks and other loud external noises) and he has continued to wear it since, as it seems to help keep him calm.

…and then fall asleep. 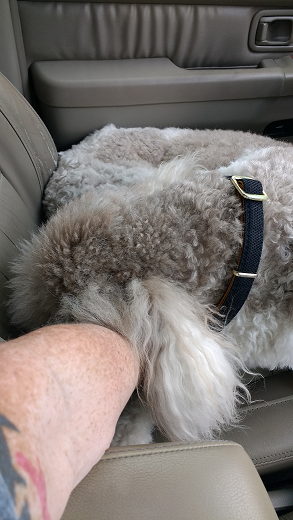 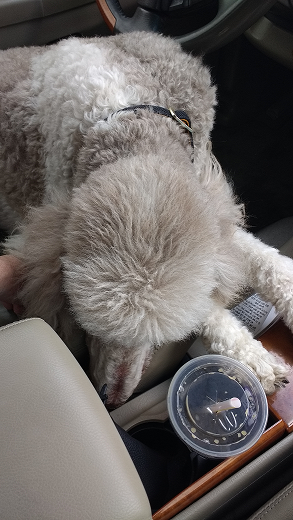 At freeway speeds, he prefers to lie down and enjoy the motion of the vehicle but prefers to sit up and take in his surroundings for speeds below ~60mph. He enjoys the company of humans far more than other dogs, and likes to know that you are within earshot of his current location. On a recent PetSmart trip, he appeared to be enjoying himself thoroughly, and the close proximity of other dogs as they passed him in the aisle ways did not seem to concern him.

He also seemed to be very comfortable with his surroundings when visiting an animal-free home this weekend. However, his stress level rose noticeable when he returned home to Sandy, Morgan and Ricky (the three permanent canine residents of my house), which seems to reinforce that Coco would prefer to be the only dog in a quiet home where he will have constant human companionship and occasional vehicular trips to stores that allow dogs.

A couple of years ago, I read an interesting article that suggested selecting a single word to focus on for the New Year versus setting several “New Year Resolutions” that most of us fail to maintain anyway within a very short time of adopting them. In response to the article, I decided to select a focus word for 2015, and it was an enjoyable experience so, for 2016, I decided to repeat the experiment and chose the word “change” as my focus word for the year.

Talk about being careful about what you ask for because it just might come true – 2016 proved to be a “year of upheavals” and threw so many unexpected changes at me that, at times, life became almost unbearable.

Any cycle of upheavals and changes eventually ends, and I’m hopeful that the transition point between 2016 and 2017 signaled the end for me so, for 2017, I have chosen the word “stability” as my focus word for the year. I hope I have chosen wisely.

Shortly after ringing in the New Year, I found myself lying in bed petting Sandy with my left hand, petting Morgan with my right hand, and enjoying how Ricky had positioned himself so that he was pressed firmly against the top of my head (when one interacts with three dogs simultaneously but has only two hands, one must get creative). Safely in a pen at the foot of my bed was Coco, my new foster (foster #7). As a dog dad, dog uncle, and dog foster dad, it was the absolute best way to experience the first minutes of the New Year.

Comments Off on Stability | posted in Uncategorized